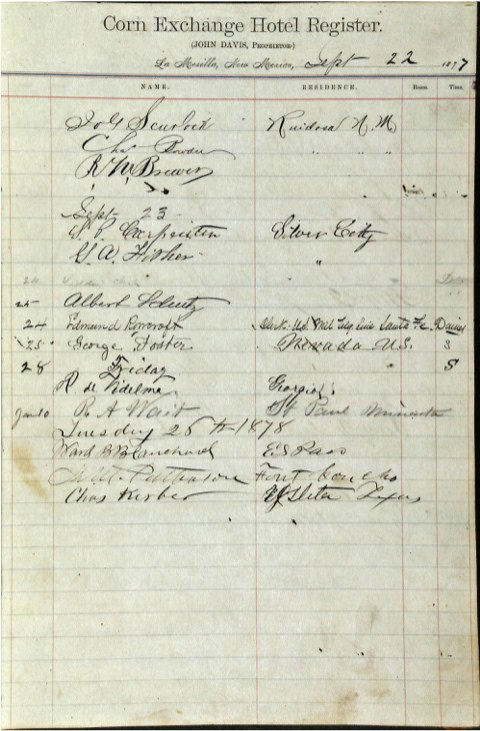 Earliest records indicate the La Posta Compound was originally constructed in the 1840's. Sam Bean and his brother Roy Bean, operated a freight and passenger service line to Pinos Altos from this building in the 1850's. After the Civil War, The La Posta Compound became an important stop on the Butterfield Stagecoach Line. During the 1870's and 1880's, the Corn Exchange Hotel, one of the finest lodges in the Southwest, operated from the building, by John Davis.

On September 18, 1877, Jesse Evans and his gang stole horses and mules belonging to Alex McSween, John Tunstall, and Richard Brewer. McSween was angry and gutted up a good size reward prompting Brewer, Bowdre and Scurlock to cut in on Even's trail. They chased Evans to the Shedd Ranch at San Agustin Pass, where Evans and the boys, at the end of a gun, convince the makeshift posse this is not their line of work and sent them packing.

Now, if this was a 1960's cowboy flic our posse would be camping by the steam strumming their guitar (which I have never discovered where they carried a guitar, but I digress) The posse check into "the finest lodges in the Southwest..." The Corn Exchange Hotel. As seen in the register below.

John Davis the proprietor of the hotel, died in the late 1870's, his wife Augustina continued to operate the hotel, a restaurant and other businesses in the building until the early 1900's.

La Posta de Mesilla Restaurant originated in the northwest corner of the building in 1939 by Katy Griggs Camunez. After Katy passed away, the property and business was acquired by a great niece, Jerean Camunez Hutchinson and her husband Tom, a.k.a. "Hutch". About a month ago Cold West Detectives had lunch with Tom at the La Posta.

A lot of History has taken place in that building. Presidents, as well as nearly every name in the Lincoln County war can be found in the Corn Exchange Hotel Register. What is not found in the register is that a century old double murder and mystery was solved at a table of the La Posta over red enchiladas with an egg on top.

I recommend the enchiladas and you can't go wrong with the egg on top.