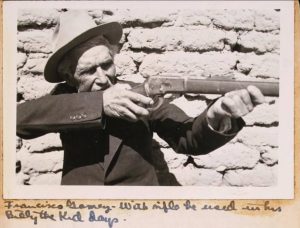 In Lincoln, Francisco Gomez had just put his coffee on and was going to the outhouse when the erie light appeared in the West. It stopped him in his tracks. The sun was coming up…but in the West? This was evil and had to be of the devil.

Plans for the creation of a uranium bomb by the Allies were established as early as 1939, when Italian emigre physicist Enrico Fermi met with U.S. Navy department officials at Columbia University to discuss the use of fissionable materials for military purposes. That same year, Albert Einstein wrote to President Franklin Roosevelt supporting the theory that an uncontrolled nuclear chain reaction had great potential as a basis for a weapon of mass destruction. In February 1940, the federal government granted a total of $6,000 for research. But in early ’42, with the United States now at war with the Axis powers, and fear mounting that Germany was working on its own uranium bomb, the War Department took a more active interest, and limits on resources for the project were lifted.

In 1943, Robert J. Oppenheimer began directing Project Y at a laboratory at Los Alamos. Here theory and practice came together, as the problems of achieving critical mass—a nuclear explosion—and the construction of a deliverable bomb were worked out.

July 16, 120 miles south of Santa Fe, the first atomic bomb was detonated. The scientists and a few dignitaries had removed themselves 10,000 yards away to observe as the first mushroom cloud of searing light stretched 40,000 feet into the air and generated the destructive power of 15,000 to 20,000 tons of TNT. The tower on which the bomb sat when detonated was vaporized.

The original $6,000 budget for the Manhattan Project ended up costing $2 billion.